It is no secret that here in Foodtopia we are completely spoiled with amazing, seasonally driven, talented restaurants to dine at. But did you know that one of our most famous establishments downtown is actually a drool-worthy chocolate shop; French Broad Chocolates?? French Broad has drawn attention in publications all over the nation including Food and Wine, Southern Living and Vogue. Now we are excited to see the ever-popular Forbes not only highlighting this amazing local establishment- but giving a nod to what is most near and dear to their hearts: Their bean-to-bar philosophy.

Below is an except from the story where they are featured amongst just two other shops in the nation for being a bean-to-bar maker to know. The full story may be viewed here. 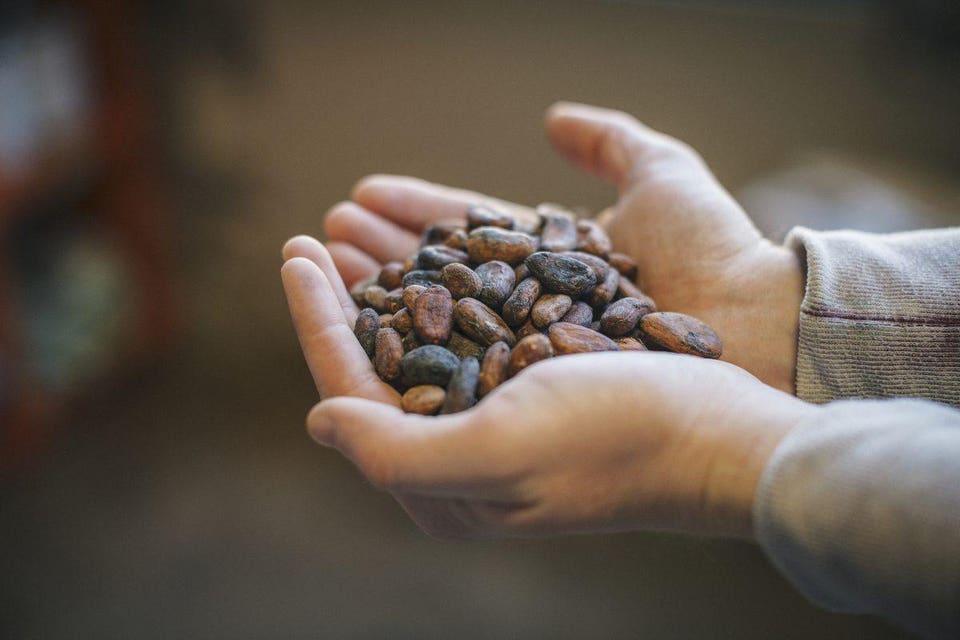 It’s an exciting time in the world of bean-to-bar chocolate, for both makers that are continuously working to make their product better and for a receptive market of consumers who are willing to spend more money on quality small-batch products, particularly when they have a compelling story. Below are three such stories, which offer a taste of the passion and hard work that goes into each beautifully wrapped chocolate bar and – after getting your hands on one (or more) – may just make your tasting experience that much sweeter. 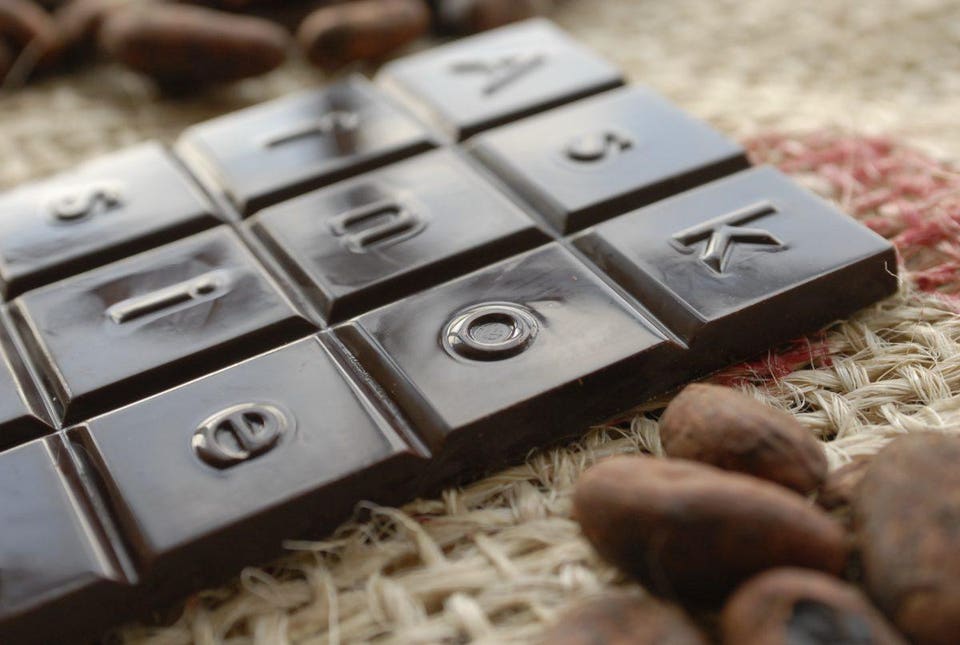 Who’s behind it: Shawn Askinosie, a criminal defense lawyer turned chocolate maker; his daughter Lawren, who was pulled into the project as a teenager and is now the company’s chief marketing officer; and a small team of about 16 people, half of which are solely focused on making the chocolate and hand-wrapping each bar.

What makes it unique: Social responsibility is at the core of everything Askinosie does. “It’s not just a buzzword, it’s who we are,” reads the company website. “Askinosie Chocolate was born committed to fairness, sustainability, minimal environmental impact and community enhancement… We’re dedicated not just to making the best quality chocolate you can buy, but to making it in such a way that the more you learn about it, the better you feel about it.”

Askinosie began making chocolate at a time when only a few others were making it in small batches. He further distinguished himself and his business by participating in direct trade – so that he knew exactly where the beans were coming from and who was growing them – and treating his cocoa farmer partners “with fairness, dignity and respect” by profit sharing and purchasing their cocoa above the farm gate price (market price), world market price and fair trade price (as outlined in Askinosie’s transparency report). 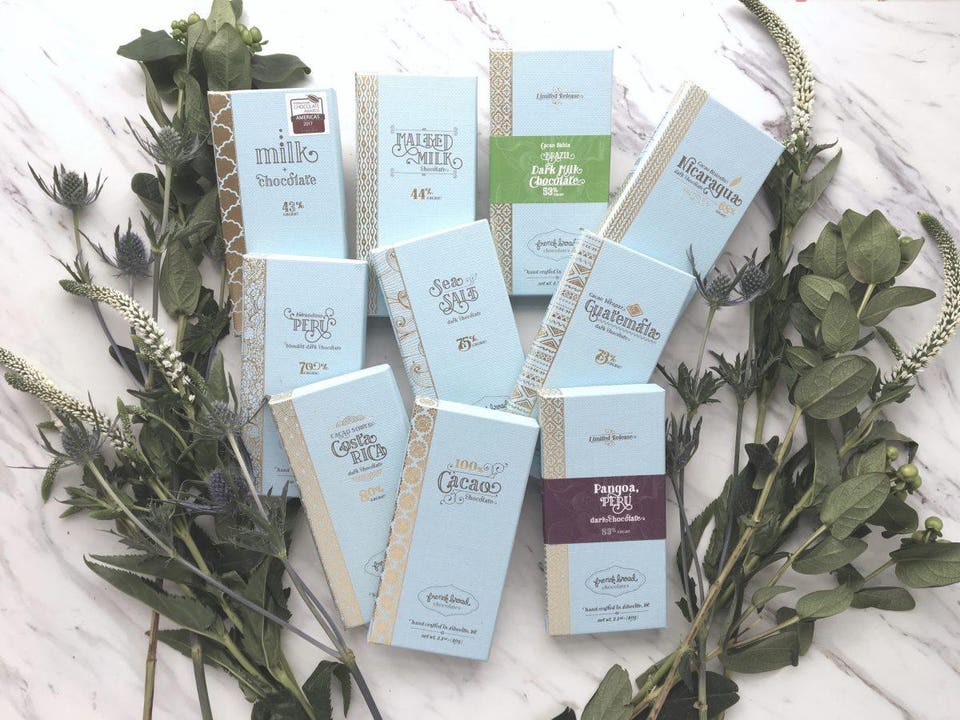 Who’s behind it: Husband-and-wife team Dan and Jael Rattigan, who solidified their interest in chocolate after dropping out of grad school, moving to a small town in Costa Rica and opening a dessert shop and cafe called Bread & Chocolate. The team also includes a crew of chocolate makers and confectioners, a manager of the ever-popular French Broad Chocolate Lounge in Downtown Asheville, and more as the company continues to expand – a new factory is set to open this fall to scale up production in order to keep up with demand.

What makes it unique: Named after the French Broad River, which runs through Asheville, French Broad Chocolates has been shaped in many ways by the charming mountain town. “When we moved to Asheville, we were smitten with the unfailing support of small, local business and the loyalty given to our innovative community of farmers,” the company website reads. “We set out to create great chocolates inspired by Asheville’s cultural terroir. We share importation of cacao with other regional chocolate makers, we include ingredients from local producers in our chocolates and desserts, and support our local farmers every chance we get.”

What to try: Nicaragua 68%, an award-winning chocolate bar made with Nicaraguan cacao beans sourced from Cacao Bisiesto, a boutique cacao company which works to preserve heirloom varietals; Dark Milk, described as “a category unto itself” with the addition of organic milk and browned butter, which add a creaminess to the rich dark chocolate; and any and all of French Broad Chocolates’ confections – everything from sorghum caramel (made with locally grown sorghum molasses) to a raspberry truffle filled with a tart local raspberry purée and dark chocolate ganache. 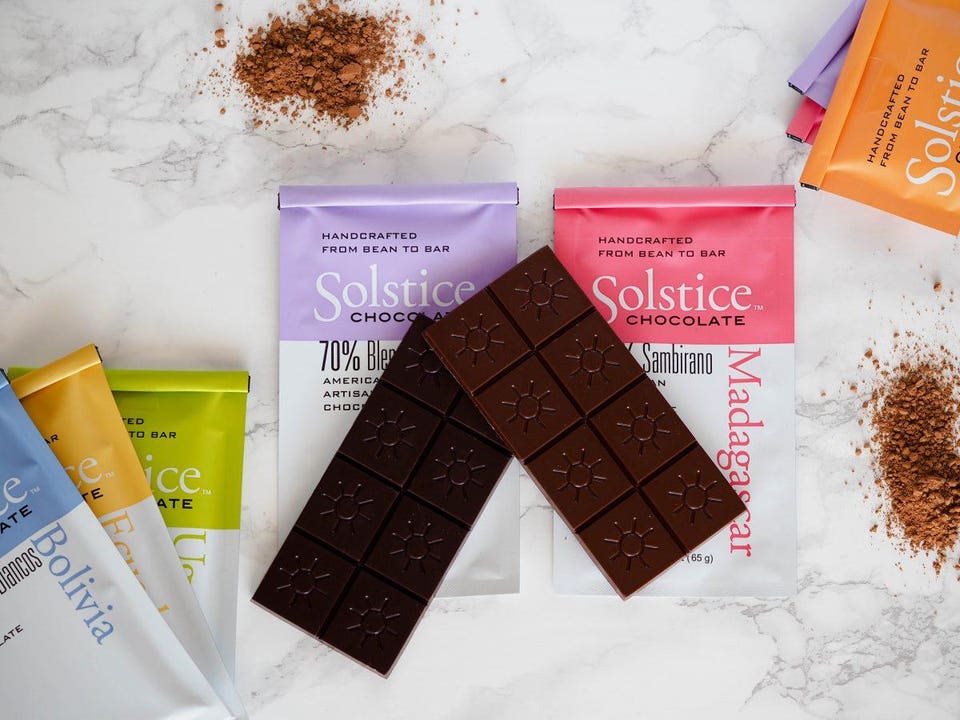 Who’s behind it: DeAnn Wallin, owner and chocolate maker, and team.

What makes it unique: A beloved craft chocolate brand in a state that loves to support local businesses and is home to a talented, award-winning community of bean-to-bar chocolate makers – which also includes Amano Artisan Chocolate and Ritual Chocolate – Solstice seeks out unique beans from all over the world to create incredible bars that do them justice. During a recent conversation Wallin told me about some beans she’s working with now that have notes of honey and cinnamon. “It’s blowing my mind,” she said. Wallin keeps things simple with her dark chocolate bars, where you’ll only find three ingredients: organic cacao beans, organic cane sugar and organic cocoa butter.

What to try: 70% Madagascar Sambirano and 70% Wasatch blend; the first bars Solstice Chocolate perfected and brought to the farmers market, where they got the attention of Matt Caputo, CEO of Caputo’s (a gourmet market and deli) and champion of the artisan craft chocolate movement in Utah. Caputo brought Solstice Chocolate into their stores and the brand grew from there.

We love that French Broad Chocolates not only supplies our community with plenty of delectable chocolate delicacies- but that they do so in a manner that supports the world around them. Because of this, we are especially honored to represent them on our walking food tours of downtown Asheville. We visit French Broad Chocolates almost every day of the week- so be sure to visit our website to check out our tours and book yours today!