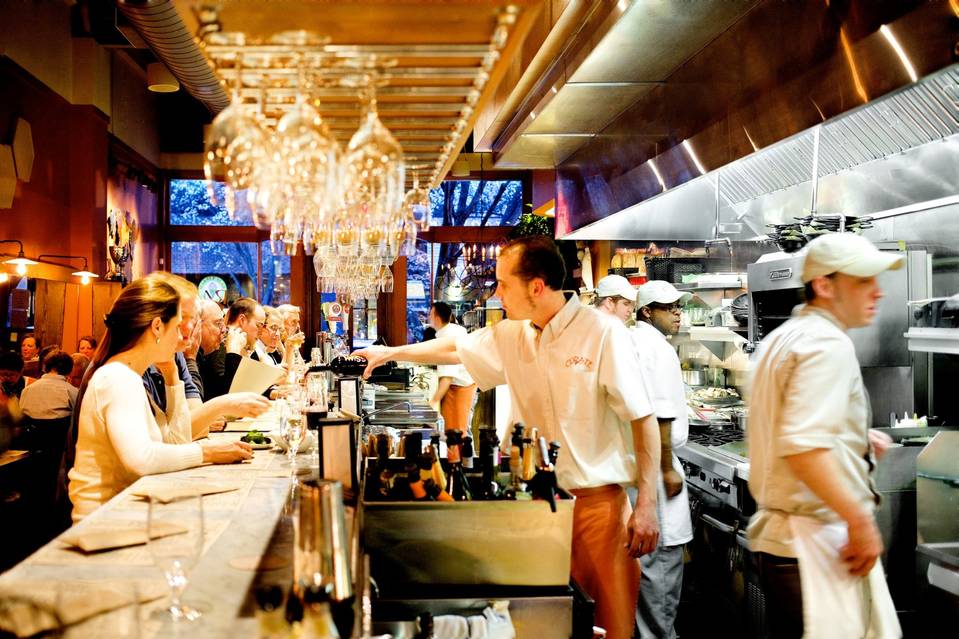 The Battery Park Book Exchange and Champagne Bar in Asheville has both an exceedingly long name and an extensive mix of my favorite things: books, coffee, dogs and Champagne. The eclectic shop was one of many wine-related highlights during a trip I took recently to visit my friend Jamie, a native New Yorker who moved to Asheville several years ago and hasn’t stopped raving about it since the day she arrived.

Asheville’s mix of Southern charm, great food and mountain scenery has long been a big draw for discerning tourists, but its wine scene was relatively obscure—at least until recently. While breweries still greatly outnumber wine spots in this city of nearly 88,000, a clutch of top wine bars and stores and restaurants with adventurous wine lists has made Asheville more than just a stop for some hops. 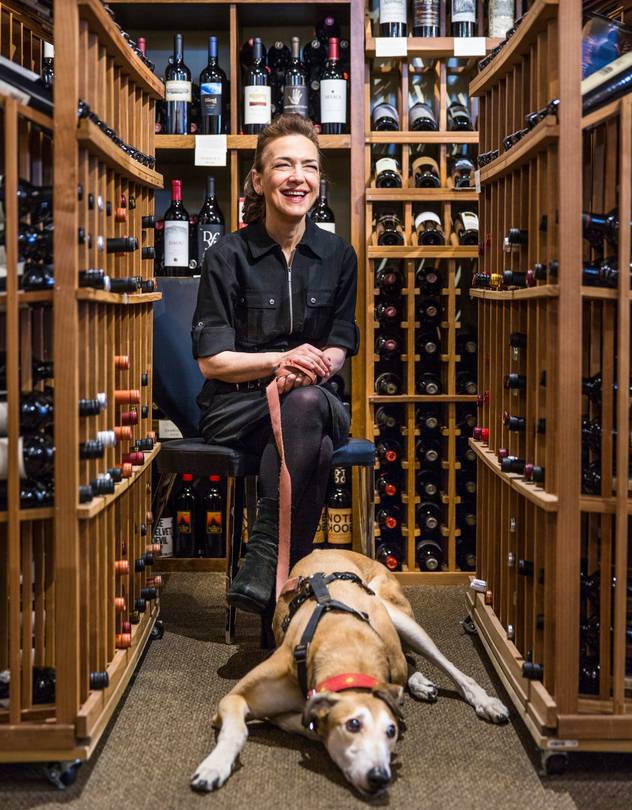 Customers at Battery Park not only get some great sparkling options (and some top nonsparkling choices as well), they can also trade their used books for store credit. “I’m drinking my art-book collection,” said Jamie’s friend Niki, holding a glass of Cava as we sat facing one another on large, comfortable sofas. “I’m drinking Prosecco, so I can stretch it out,” said Patti, another friend trading in her credit. I had a glass of very good Scharffenberger Cellars sparkling wine from California for a mere $13. (I paid cash.)

Better prices are one of Asheville’s advantages; a glass of good crémant starts as low as $7 at Battery Park—less than half of what I’d expect to pay in New York. Another bonus: The company of dogs. As we sipped wine, Niki’s Airedale lounged at our feet, one of many canines patronizing the bar that night. Does the city actually allow dogs in bars? I asked Battery Park’s jolly and voluble co-owner, Thomas Wright. Not exactly, he replied, before adding: “Maybe we should put hairnets on the dogs.”

Dogs were everywhere at Metro Wines, too. Co-owner Gina Trippi even employs one of her two greyhounds, Bandit, as a sales tool; his image is on “Bandit’s Bargains” signs throughout the store, touting the very best buys.

Ms. Trippi and her husband, John Kerr, moved to Asheville three years ago from Washington, D.C., where she was an attorney and he was a financial analyst. Changing careers as well as location, they opened Metro Wines. Ms. Trippi said her husband already knew a great deal about wine but added that they had to work particularly hard because “we’re a wine shop in a beer town.”

The store was abuzz with activity the day I stopped by. A book club was meeting in the backroom, where members appeared to be doing more drinking than talking. In front, the store’s education director, Andy Hale, was pouring Sauvignon Blancs for customers as part of the free, daily tasting. 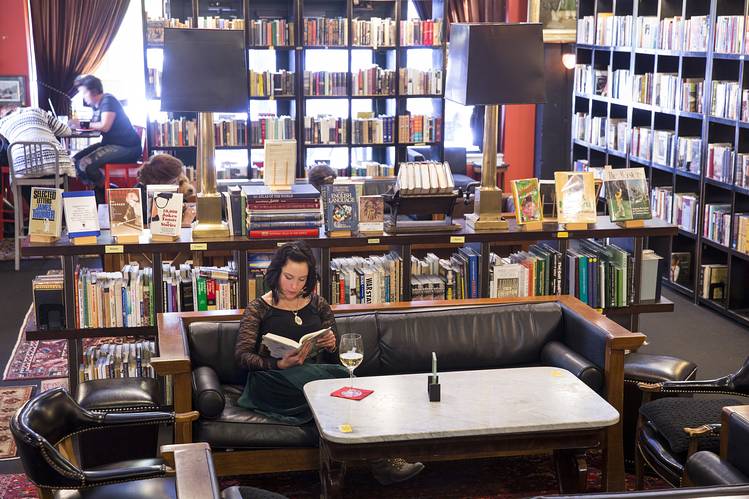 The winery, which produces about 150,000 cases of wine a year, is located on the Biltmore Estate, the city’s biggest tourist attraction. The estate includes a 250-room, 19th-century French Renaissance home, built by industrialist George Vanderbilt and billed as “America’s largest home,” as well as extensive gardens and around 50 acres of vineyards. During my visit, winemaker Bernard Delille and associate winemaker Sharon Fenchak put together a small tasting of their wines, produced from California and North Carolina fruit.

The 2015 Biltmore Reserve Chardonnay is a big, rich, barrel-fermented wine that I would have called a typical California Chardonnay—except that it was made from North Carolina fruit. The Biltmore Sparkling Blanc de Blancs, a fruity wine made from California grapes, was equally pleasant and well-made.

‘A clutch of top wine bars and stores and restaurants with adventurous wine lists has made Asheville more than just a stop for some hops.’

I didn’t find any North Carolina selections on the wine lists of the Asheville restaurants I visited, but I did find plenty of good wine and food. The menu at Local Provisions relies on North Carolina purveyors, but the wine list is more global, featuring good choices from Sicily, France and California. I loved the 2015 Lioco Indica Rosé of Carignan, from Mendocino County, Calif., which was lively, juicy and well-priced at $32. The restaurant, opened last year by Perry King and chef Justin Burdett and his wife, Brooke Palmer, has since added a North Carolina wine to its list: an Albariño from Sanctuary Vineyards.

At Table, a restaurant fixture in Asheville since 2005, chef-owner Jacob Sessoms has created an adventurous wine list of unfamiliar names and grapes from places like Sicily and Austria. The wine list at tapas bar Cúrate is even more daring, thanks to co-owner and wine director Felix Meana’s emphasis on obscure Spanish regions and grapes. 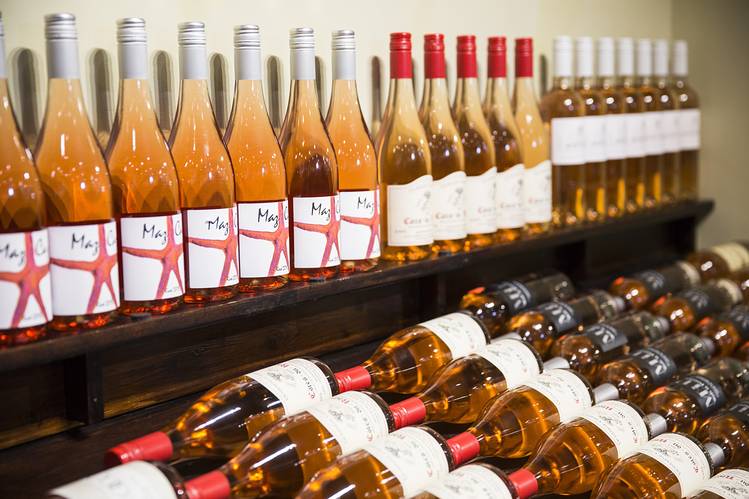 Mr. Meana and his wife, Katie Button, met in Washington, D.C., and came to Asheville over six years ago. Their reasons for moving sounded much like those of Jamie and everyone else I met who has made the city their home.

They were looking for a smaller community in which they could “make a bigger impact,” Mr. Meana wrote in a follow-up email, adding that the town “is full of entrepreneurs, people like us who moved there because we wanted to live there.”

Of course, those who visit for just a few days will also find plenty to enjoy. I’m already planning my return trip. I’ll pack a few books to trade for some bubbly, though sadly I’ll leave my own dogs behind.