Greetings Foodtopia fans! It’s no secret that Asheville has been getting TONS of media attention. Yet it still always makes us smile to see our little mountain town in the big players of national publications. Check out this great write up a couple weeks ago from CNN that highlights the food and beer scene here in Asheville, including a couple of our all-time favorites; Bhramari Brewhouse and Battery Park Book Exchange!

Below is an excerpt from the write up, Click here for the full article.

Asheville, North Carolina (CNN) — Before any of the breweries in Asheville can brew beer, Lisa White knows they need yeast.
A co-owner of White Labs, a San Diego-based provider of yeast to professional and home brewers, White opened up an Asheville, North Carolina, location in January 2017 to better serve her company’s East Coast clients.
White wanted the company’s new location to have a quirky, beer- and music-loving scene and a hiking, biking and kayaking culture.
“If Mammoth Lakes and Austin had a baby, it would be Asheville, and that’s why I love this place,” says White, who was in medical school while her husband, Chris, was finishing a PhD in biochemistry.
His lab work on fermentation furthered his interest in getting a higher quality yeast for his home brewing projects, and Chris founded White Labs in San Diego in 1995. Lisa left medical school and joined the company full-time in 1997. (They’re now divorced but still co-own their company together.)

And the industry is still expanding, with Fermented Nonsense Brewing and Black Mountain Brewing opening in 2018, and other breweries scheduled to open in 2019, the tourism bureau says.
While brewers can choose from around 300 regular and seasonal yeast strains, grown from White Labs’ mother cultures stored in yeast banks at minus 80 degrees Celsius, the top three sellers are the California Ale Yeast, London Fog Ale Yeast and the German Lager Yeast.

Lisa White, co-owner of White Labs, explains all the miraculous ways yeast imparts flavor and texture to beer, bread, pizza and more. Here’s more on Lisa’s recommendations for enjoying Asheville.
Once in Asheville, White started inviting breweries to experiment with new and different strains of yeast.
“We’ve gotten so many requests and have done a lot of collaborations with breweries in the area, and even cideries in the area who want to do special projects with us.”
She also wanted to teach a wider audience about the power of yeast. So she opened White Labs Kitchen & Tap in October 2017, feeding people in the same building as the lab, demonstrating that changing the yeast changes the taste of beer, pizza crust, hamburger buns and fries.
“What a lot of people don’t know is there are over 500 flavor and aroma compounds that yeast can provide to the beer,” she says. “What we do (in the restaurant) is we take one recipe, it’s one stock recipe, and we put it in different fermenters and the only thing we change in those say four different types is the yeast.”
She recommends trying their Tabberer IPA flight to taste the differences between the different yeasts.
“We’re just the cool scientists. That’s just who we are.”
Although White is relatively new to the Asheville area, it was easy for her to come up with a list of her favorite places to eat breakfast, lunch and dinner; listen to music; check out the visual art scene; find a good book; and explore the outdoors. She also has an extensive list of places to drink beer, although she gets to call that work.
With her best friend Lara Wenner, a Las Vegas-based doctor, coming to town for a visit, White came up with a list of places she wanted to share with her friend.

Flying through the air

Zip lining at Navitat has been on White’s bucket list since before she moved to Asheville. “They also take you on a trail and show you about the flora around, and then you get to ride above it and see a great view,” she says.
Navitat’s zip lines are located at Moody Cove, a 242-acre property that dates back to pre-Civil War days, says Navitat CEO Ken Stamps.
White went on the Blue Ridge Experience tour, which offers three side-by-side zip lines, including one that is 3,600 feet long, is 350 feet above the floor at its highest point and offers speeds of up to 60 miles per hour, Stamps says.
“The Navitat campus was so beautiful, the guides were so knowledgeable, caring and entertaining, the zip lining runs were spectacular,” White says “I really felt like I was flying.”
Well-Bred restaurant’s Weaverville location is a great place to stop for lunch after zip lining. (Don’t fill up beforehand!)
Option B: White and her family have annual passes to Biltmore, the Vanderbilt estate, where she often does an eight-mile walk training for an annual three-day breast cancer walk.
Navitat, 242 Poverty Branch Road, Barnardsville, NC 28709, +1 828 626-3700 (Open March 2, 2019 through mid-December this year)
Well-Bred, 26 N. Main Street, Weaverville, NC 28787; +1 828 645-9300
Biltmore, One Lodge Street, Asheville, NC 28803; +1 800 411-3812

Time for a beer

Bhramari Brewing Company isn’t like most other breweries, and that’s saying something in Asheville.
Bhramari is one of White’s favorite places to take people. Co-owner and head brewer Gary Sernack “is just a little nuts, but you gotta love that about him because he kind of takes risks,” she says.
He’ll think, “‘What if I just put a pizza in the beer?’ and, y’all, he really did that,” she says. “It’s kind of crazy. I’m sure sometimes it doesn’t work, but a lot of times it does and he just loves to put it out there.”
One of the beers she really liked was a play on an Arnold Palmer, so “it had tea in there and also lemon, and it was a refreshingly good beer,” she says. “If you put this in a can, I will take it tubing down the French Broad River.”
Option B: Support White Labs’ charitable arm, Beer 4 Boobs, which raises funds for breast cancer, by getting a pint at Catawba Brewing Co. or Hillman Beer. They support a cause “dear to my heart,” she says.
Bhramari Brewing Co., 101 S Lexington Ave, Asheville, NC 28801, +1 828 214-7981
Catawba Brewing Co. (South Slope location), 32 Banks Ave, Asheville, NC 28801; +1 828 552-3934
Hillman Beer, 25 Sweeten Creek Road, Asheville, NC 28803; +1 828 505-1312

Dinner by the river

After a few visits to Asheville, White wanted to take her friend for a great meal that’s a bit off the beaten path. She picked Smoky Park Supper Club, a light-filled river- and farm-to-table restaurant built from the massive containers used to transport goods on container ships and railroads.
“Not only do you get a great meal, but you get a great view, and the river runs right there,” White says. “It’s just outside of downtown, so if you just want to venture a little bit away from the main downtown [with] an easy place to park, that’s a really great place to try.”
Option B: “Cúrate, to me, is the most authentic Spanish tapas you can get stateside,” she says, and she loves the house sangria. Cúrate regularly tops lists of best Asheville restaurants, and “that’s where I like to take people.”
Smoky Park Supper Club, 350 Riverside Drive, Asheville, NC 28801; +1 828 350-0315
Cúrate, 13 Biltmore Avenue, Asheville, NC 28801; +1 828 239-2946

Time for even more fun

Some bookstores have coffee bars. Battery Park Book Exchange has an actual bar with an extensive menu and lots of little nooks and crannies among the new and used books to drink and read and meet to talk about books and writing. That’s where White and her friend Wenner met to have a glass of champagne and stroll the book aisles.
“It’s a really cool, relaxed place,” she says, “and not your typical bookstore.”
Option B: Orange Peel is just one of Asheville’s hoppin’ music venues. At one show at Orange Peel, “Lauryn Hill was 10 feet away from me,” says White.
Battery Park Book Exchange, 1 Page Avenue, #101, Asheville, NC 28801; +1 828 252-0020
Orange Peel, 101 Biltmore Avenue, Asheville, NC 28801, +1 828 398-1837 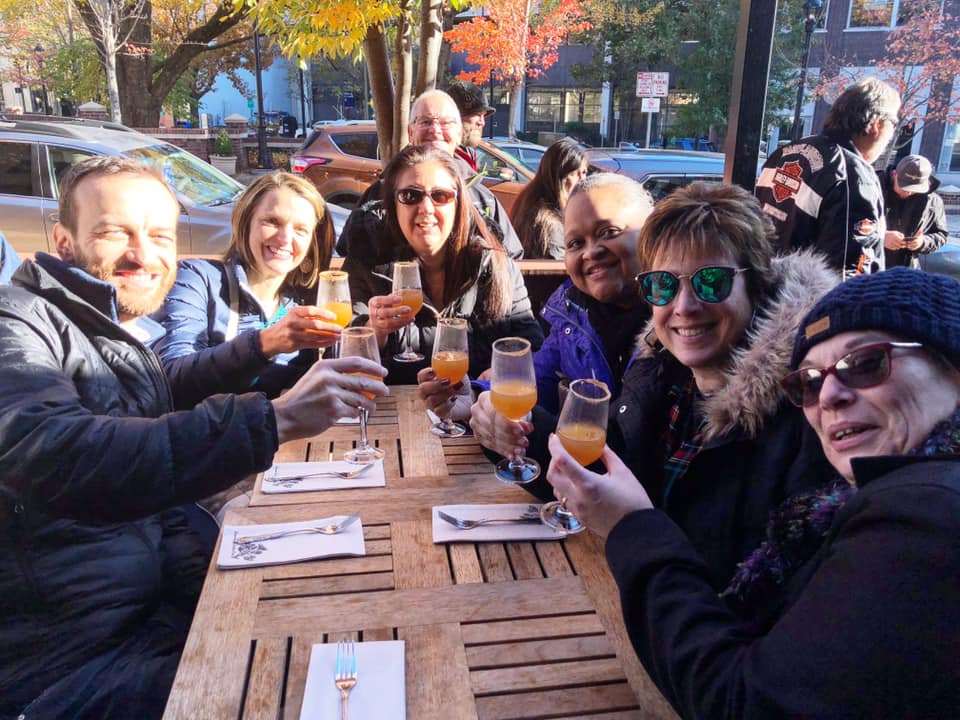 If all of these aren’t enough reason to pack your bags and head our way, we’ve got one more; Eating Asheville food tours!! On our downtown food tours you’ll have the opportunity to experience several of Asheville’s best restaurants all in one afternoon. You’ll also get insight into Asheville history as well as our diverse culinary scene. Visit our website at www.eatingasheville.com for more info and to book your tickets today!